Seven days to fall in love, fifteen years to forget, and seven days to get it all back again…

Eva Mercy is a single mother and bestselling erotica writer who is feeling pressed from all sides. Shane Hall is a reclusive, enigmatic, award-winning novelist, who, to everyone’s surprise, shows up unexpectedly in New York.

When Shane and Eva meet at a literary event, sparks fly, raising not only their buried traumas, but also the eyebrows of the Black literati. What no one knows is that fifteen years earlier, teenage Eva and Shane spent one crazy, torrid week madly in love. While they may be pretending not to know each other, they can’t deny their chemistry – or the fact that they’ve been secretly writing to each other in their books through the years.

Over the next seven days, amidst a steamy Brooklyn summer, Eva and Shane reconnect – but Eva’s wary of the man who broke her heart, and wants him out of the city so her life can return to normal. Before Shane disappears though, she needs a few questions answered… 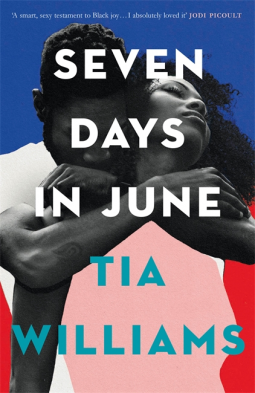 I stayed up all night reading Seven Days in June! I just couldn’t put it down! The writing was engaging and had us move seamlessly between narrators and timelines. The characters were (for the most part) lovable and I was rooting for Eva and Shane the whole time.

Eva and Shane had a rough past which crossed paths when they were teenagers for seven days in June. Fast forward 15 years and they are both writers who made names for themselves in the Black Literati. Somehow, they never crossed paths until now. They still have feelings for each other but there is some animosity from Eva because she believes he abandoned her all those years ago when she thought they were going to be together forever. Shane finally sought her out and is trying to prove he never wanted to leave her. This quote from their first reunion had me dying!!

“One thing,” she whispered, her lips by his jaw. She didn’t want anyone to overhear. “Before I forget.”

“Stop writing about me.”

Now they are spending another seven days together in June healing their relationship. During this time, Shane is helping at-risk kids and Eva is trying to get a movie deal that ideally doesn’t white-wash her characters. We also see the contrasting relationships Eva has with her mother and daughter. I absolutely loved watching Eva do everything in her power to break the cycle of neglect from generations before her.

As much as I loved most of the novel, I did have some issues. While I understand some of the liberties taken in Audre, the daughter, I felt she didn’t come across as a believable tween. However, I am not a mother and I can never know what it is like to be a tween in this day and age. Most aspects make sense given the way society is today, but it felt a bit much. I also absolutely hate the miscommunication trope and it is very present in this novel. By the time those instances came up, I was already invested and let it slide. This could have been 4.5-5 stars if it wasn’t present, but it was and it lessened my enjoyment. If you don’t mind that trope, then you can see this as a 4.5 star rating! My rating was 3.5 but on goodreads, I rounded up to 4 stars.

If you love hard hitting romances that celebrate black people, definitely pick this up! Just be warned, there are lots of triggers, so please refer to the list of them I provided above.

Thank you to Quercus Books for the arc! This title was released June 2, 2021.

According to NBC News, Tia Williams “is a writer’s writer with a fashionista twist.” In 1997, the University of Virginia grad embarked on a career as a magazine beauty editor, working her way up the mastheads of YM, Elle, Glamour, Lucky, Teen People, and Essence. In 2004, she pioneered the beauty blog industry with her long-running, award-winning site, Shake Your Beauty.

The same year, her debut novel, The Accidental Diva hit shelves – and received glowing coverage in Marie Claire, Cosmopolitan, Allure, and The New York Times. She went on to co-write Iman’s makeup memoir, The Beauty of Color, and penned two young adult novels, It Chicks and Sixteen Candles.

In 2016, her novel, The Perfect Find, won the African American Literary Award for Best Fiction – and garnered rave reviews in The Washington Post, Essence, Cosmopolitan, People, Ebony and InStyle. Gabrielle Union is set to star in the film adaption for Netflix.