A group of Koreans are making their way across a disease-ravaged landscape—but to what end? To the Warm Horizon shows how in a post-apocalyptic world, humans will still seek purpose, kinship, and even intimacy. Focusing on two young women, Jina and Dori, who find love against all odds, Choi Jin-young creates a dystopia where people are trying to find direction after having their worlds turned upside down.

Lucidly translated from the Korean by Soje, this thoughtful yet gripping novel takes the reader on a journey through how people adjust, or fail to adjust, to catastrophe. 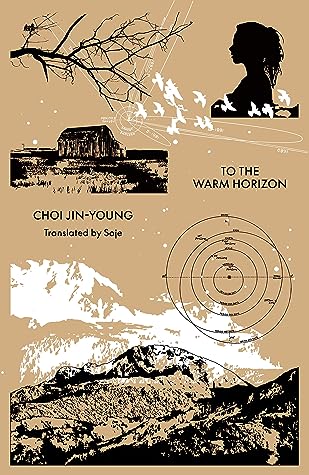 To the Warm Horizon follows a lesbian relationship that takes place in a post-apocalyptic world where everyone has become a threat. The writing was subtle while being thought provoking. We see multiple point of views of people trying to get their life back while learning they were never really living life to begin with. I really loved all the different characters and their journey. It was very character driven and had me thinking a lot about the way I am currently going about living my life. I related so much since we are living in a pandemic of our own, admittedly my experience isn’t as intense and tragic as this story.

I absolutely adored Jina and Dori. Watching them fall in love was breathtaking. Dori is instantly drawn to Jina by the way she keeps going on her daily routines with dignity and life. After spending days on the road collecting necessities, Dori accumulates things that would make Jina happy, like a tube of lipstick. That was such a beautiful gesture and a favorite part of mine. From there they really started to blossom and become inseparable. I also enjoyed reading about Joy and Gunji. Joy is Dori’s younger deaf sister and Gunji is Jina’s former neighbor.

What I found most interesting about Gunji was that this new world suited him better than his previous life. He was constantly abused and bullied by his peers and father. The only ones kind to him was Jina and her mother. In this world, everyone has other problems to occupy them, giving Gunji a chance to live for the first time. He finally has a dream and that is to find a warm beach. I really felt for his story and wish we got to see more of the moments he shared with Jina and Dori on the road.

We also had the point of view of a mother named Ryu. She was a workaholic who ignored her husbands affairs and tried to provide the best of everything for her children. At the start of the pandemic, her daughter dies and she leaves Korea right away with her husband and son. She learns that the life she was living before wasn’t much of a life. She worked hard so her children could have a better life, but it took away her time from them. She now has nothing but time and is finally able to confront the issues she has been ignoring. We didn’t see much of her and her family, but when we did they were important and I just wish I knew how her story ended. I just know her she and son at least survived because we start with a prologue of her sharing her story. I loved seeing how much she finally grew into herself.

While I did go deeper than intended onto some characters, I didn’t spoil much. So many things happen despite such a short novel. The way these characters came in and out of each other’s paths and how it affected their souls was heart wrenching. It was so beautiful to see how love can bloom in such a horrible environment. That love keeps you going and even saves you. Despite the wholesome relationships blooming, there are moments of people turning for the worse and becoming opportunist.

This novel is very character oriented so the diseases and outside world aren’t the focus, just the circumstance. Don’t go into this expecting to learn about the pandemic or how it mutates or ends, because we never really get answers. I am all about character arcs so this didn’t bother me. What did bother me was how loose it ended. I can see how this was intentional, but I grew so attached!

This is actually the first queer Korean story that has been translated and I am so thankful to Soje for that. They did a really great job and without them I wouldn’t have been able to enjoy this story.

If you are looking for a unique dystopian story featuring a lesbian love story, definitely give this a go!

Korean writer Choi Jin-young marked her literary debut by winning the 2006 Silcheon Munhak New Writer’s Award. Her works include the novels The Name of the Girl Who Brushed Past You Is . . ., The Never-Ending Song, Why Did I Not Die, The Proof of Ku, and To the Warm Horizon, as well as the short-story collection A Spinning Top. She won the Hankyoreh Literary Award in 2010 and the Shin Dong-yup Literary Prize in 2014.

4 thoughts on “ARC Review: To the Warm Horizon”