A lifetime holding it together. One party will bring it crashing down.

Malibu: August, 1983. It’s the day of Nina Riva’s annual end-of-summer party, and anticipation is at a fever pitch. Everyone wants to be around the famous Rivas: Nina, the talented surfer and supermodel; brothers Jay and Hud, one a championship surfer, the other a renowned photographer; and their adored baby sister, Kit. Together, the siblings are a source of fascination in Malibu and the world over-especially as the offspring of the legendary singer, Mick Riva.

The only person not looking forward to the party of the year is Nina herself, who never wanted to be the center of attention, and who has also just been very publicly abandoned by her pro tennis player husband. Oh, and maybe Hud-because it is long past time to confess something to the brother from whom he’s been inseparable since birth.

Jay, on the other hand, is counting the minutes until nightfall, when the girl he can’t stop thinking about promised she’ll be there.

And Kit has a couple secrets of her own-including a guest she invited without consulting anyone.

By midnight the party will be completely out of control. By morning, the Riva mansion will have gone up in flames. But before that first spark in the early hours before dawn, the alcohol will flow, the music will play, and the loves and secrets that shaped this family’s generations will all come bubbling to the surface.

Malibu Rising is a story about one unforgettable night in the life of a family: the night they each have to choose what they will keep from the people who made them . . . and what they will leave behind. 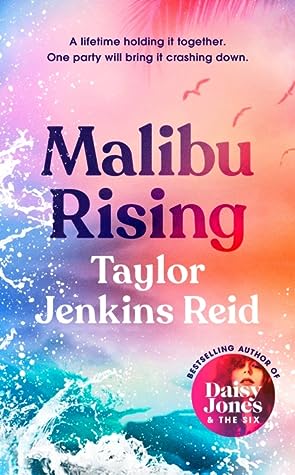 Reid really knows how to bring characters to life. I still feel like Evelyn Hugo and Daisy Jones are real people to this day! When I saw Reid was publishing another historical fiction novel, I had to request it right away. Malibu Rising follows the Riva family (we met the most famous one in previous novels) in dual timelines. One timeline is leading up to the Riva sibling’s annual house party in 1983 and the other is following the story of their parents relationship and the siblings adolescence.

The novel really started off strong. I quickly became invested in the past story line of June and Mick. I really felt for June and was rooting for her happiness along with her children. Mick is the worst husband and father ever. I couldn’t care less about what happens to him. The Riva siblings were so multidimensional and had a really great bond. I have three sisters myself, so I really related to the sibling relationships. I absolutely loved Nina, the oldest, and was rooting for her the whole time. She is at a crossroads where she can repeat her mother’s fate and it was so beautifully written. Jay and Hud are “twins” who are inseparable in all areas of life. Unfortunately, Hud falls for Jay’s ex-girlfriend and is trying to figure out a way to break it to him without ruining their relationship. Then there is the youngest, Kit. I absolutely adored Kit and wish we saw more of her. She is struggling with her identity and really trying to find a way to express herself authentically. The moments she had with Nina were my favourite.

The current timeline was great in the first half, but in the second half it became a bit too much. In Part Two we ditch the dual timeline and follow an hour by hour account of the events unfolding at the famous Riva party. Every big name star is present and things get crazy. My issue was that we were introduced to so many new characters explaining their relevancy in the industry and why they were there. I understand introducing a couple of people that have relationships with the Riva family but a lot had no affiliation and were just famous people hanging out. Did I really need to know their life story for a couple of pages just to never hear from them again? On the other hand, a couple did sound fascinating, so I could only theorize that maybe one of them is going to be the main character in a future novel..

Overall, I was so satisfied in the ending and happy with how the family dynamics were handled. While this is the eighties with an industry not that diverse, I understand the lack of representation. However it is still a fictional story, so I did hope there would be some diversity. Taylor Jenkins Reid is easily one of my favourite authors, though, so I would love more diverse main characters like Evelyn Hugo in the future. If you like historical fiction or any of Reid’s past novels, you will definitely enjoy this!

Thank you to Hutchinson for the arc! This title releases May 27, 2021.

Taylor Jenkins Reid is the author of The Seven Husbands of Evelyn Hugo, One True Loves, Maybe in Another Life, After I Do, and Forever, Interrupted. Her novels have been Indie Next Picks, chosen by Book of the Month, and featured in People, US Weekly, Entertainment Weekly, Good Morning America, and more. Her newest novel, Daisy Jones and the Six, is a New York Times bestseller. She lives in Los Angeles.