Two former best friends return to their college reunion to find that they’re being circled by someone who wants revenge for what they did ten years before—and will stop at nothing to get it—in this shocking psychological thriller about ambition, toxic friendship, and deadly desire.

The Girls Are All So Nice Here opens when Ambrosia Wellington receives an invitation to her ten-year college reunion. Only, slipped in with all the expected information about lodging and the weekend’s schedule is an anonymous letter that says: “It’s time to talk about what we did.” Instantly, Ambrosia realizes that the secrets of her past—and the people she thought she’d left there—aren’t as buried as she’d thought. Amb can’t stop fixating on what she did—and who she did it with. Larger-than-life Sloane Sullivan (“Sully”), who could make anyone do anything. The game they played to get a boy who belonged to someone else, and the girl, Amb’s angelic roommate, who paid the price.

Amb had thought that she and Sully had gotten away with what they did their first semester at Wesleyan. But as Amb receives increasingly menacing messages during the reunion, it becomes clear that she’s being circled by someone who wants more than just the truth. Amb discovers that her own memories don’t tell the whole story, and that her actions and friendship with Sully had even more disturbing consequences than she ever imagined. 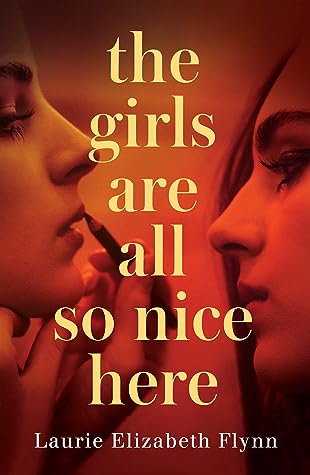 The Girls Are All So Nice Here was a dark and wild ride. The girls were definitely not so nice. I was shocked how far these characters went for the sake of entertainment. I instantly thought of the infamous quote from Abbott’s Dare Me.

“There’s something dangerous about the boredom of teenage girls.”

Amb is eager to impress ultimate mean girl, Sully. Sully is looking to find someone willing to come to her level. Things get dangerous fast. We follow two timelines. One is during Amb’s college days and the other is 10 years later to the present time. I personally loved the two timelines and was equally invested in both.

While I was really interested in what was happening throughout the book, I was a little bothered by the lack of motivation. Boredom and finding people annoying really wasn’t reason enough for some of the things these girls did. Still, I was somehow invested. There are obviously some twists and turns and you are left feeling dizzy by the end! I really enjoyed this roller-coaster of a ride, but please be aware, there are very triggering topics!

If you were a fan of Dare Me, Mean Girls, or Pretty Little Liars growing up, then this is the perfect adult version to sink your teeth into!

Thank you to HQ and Netgalley for the arc! This title was released April 1, 2021.

Laurie Elizabeth Flynn is a former model who lives in London, Ontario with her husband and their three children. She is the author of three young adult novels: Firsts, Last Girl Lied To and All Eyes On Her, under the name L.E. Flynn.

Her debut adult fiction novel, The Girls Are All So Nice Here, will be released in 2021. It has sold in eleven territories worldwide and has been optioned for TV by AMC.

Thank you to HQ for hosting this Blog Tour. Check out the rest of the stops below!

2 thoughts on “Blog Tour: The Girls Are All So Nice Here”