Brutally dumped by her girlfriend, Ally is homeless, friendless and jobless… but at least she has Malcolm. Wounded and betrayed, Ally has made off with the one thing she thinks might soothe the pain: Emily’s cat.

After a long train journey she arrives home to her dad in Sheffield, ready to fold herself up in her duvet and remain on the sofa for the foreseeable. Her dad has other ideas. A phone call later, and Ally is reunited with her first ever beard and friend of old, Jeremy. He too is broken-hearted and living at home again.

In an inspired effort to hold each other up, the pair decide to sign up for the local half marathon in a bid to impress their exes with their commitment and athleticism.

Given neither of them can run, they enlist the support of athletic, not to mention beautiful, Jo. But will she have them running for the hills… or will their ridiculous plan pay off…? 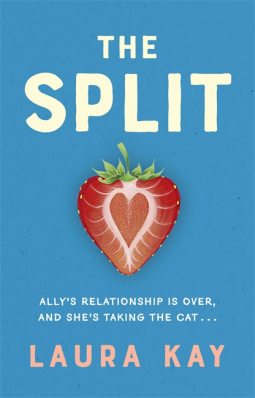 This was such a sweet read in more ways than one! The friendships, pining, and baked goods will leave you feeling warm and satisfied. Seriously, I had too many tea cakes reading this!

Ally gets dumped by her long-term girlfriend, Emily, and immediately goes back to her childhood home (with the ex’s cat!) to lick her wounds. Ally’s childhood friend, Jeremy, is also back home and miserable with a breakup of his own. Together they fantasize ways to get their exes back.

When Jeremy finds out his ex will be running a marathon, he convinces Ally to join with him. Did I mention they can barely make it past a mile?

I absolutely adored the friendship with Jeremy and the marathon goal they had set out for themselves. It is so endearing to see them work towards this goal. Did they have questionable motivation? Yes. But they find out a lot about themselves along the way.

Throughout this journey, Ally stays in touch with Emily via email to show how much she has changed and tries to make her interested again (and to use the cat as bait to make Emily come visit her). Ally even starts to show off a new person who has entered her life to make Emily jealous.

The side characters at Ally’s new job were so adorable and I loved all the gay representation in this book. It was refreshing to not have hetero-normativity present.

I recommend this to all rom-com lovers!

Thank you to Quercus and Netgalley for the arc! This title was released March 18, 2021.

Laura Kay is a writer and editor. She has an MA in American History from the University of Sheffield, and now lives in East London with her wife and cats. In 2018 Laura was selected as one of the ten PRH WriteNow mentees. The Split is her first novel.

One thought on “ARC Review: The Split”