He saw the darkness in her magic. She saw the magic in his darkness.

Wren Southerland’s reckless use of magic has cost her everything: she’s been dismissed from the Queen’s Guard and separated from her best friend—the girl she loves. So when a letter arrives from a reclusive lord, asking Wren to come to his estate, Colwick Hall, to cure his servant from a mysterious illness, she seizes her chance to redeem herself.

The mansion is crumbling, icy winds haunt the caved-in halls, and her eccentric host forbids her from leaving her room after dark. Worse, Wren’s patient isn’t a servant at all but Hal Cavendish, the infamous Reaper of Vesria and her kingdom’s sworn enemy. Hal also came to Colwick Hall for redemption, but the secrets in the estate may lead to both of their deaths.

With sinister forces at work, Wren and Hal realize they’ll have to join together if they have any hope of saving their kingdoms. But as Wren circles closer to the nefarious truth behind Hal’s illness, they realize they have no escape from the monsters within the mansion. All they have is each other, and a startling desire that could be their downfall.

Love makes monsters of us all 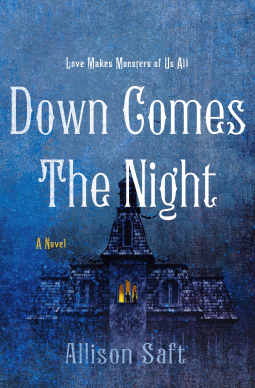 This post was delayed a day, but I just had to listen to the audiobook! I am happy to say, it was magnificent. It was just as atmospheric as I had hoped and I adored all the accents. I actually read a physical review copy as well which I won from the author’s giveaway! I am extremely grateful for that because I was anticipating this book for months!

I first heard about Down Comes the Night from my lovely friend Cossette and ever since I was itching to get my hands on it. She knows I am obsessed with gothic literature and fantasy novels. Once it arrived, I just stared at it for a long while because the cover is so beautiful. As I started to flip through, I saw the dedication and instantly I knew I would fall in love.

For all the girls who feel too much.

Down Comes the Night was atmospheric, emotional, and romantic. We are quickly introduced to Wren who is seen as being weak for her empathetic ways. She is always trying to do the right thing, even if it gets her in trouble with the queen, who is also her aunt. This was a running theme throughout and I loved how Wren constantly stayed true to herself and her ways. I got very emotional at the end of chapter 28, where Wren reflects on the way she is and how she needs to be seen and cared for.

On the topic of being seen, Wren is a bisexual character. As a bisexual myself, it was refreshing for me to see. Not only is it not a big deal in her world, but she cares for someone of the opposite sex, which usually isn’t the interest for a bisexual character. Sometimes people discredit bisexual people if you don’t end up with the same sex. I am married to a man and am constantly being seen as “choosing a side”. Seeing characters who end up with the opposite sex and not be disowned for it is what we all need more of. I am happy I am properly seen in this novel. I will move on now because this can easily be its own post.

Hal. My broken and misunderstood babe. Saft really crafted this antihero perfectly. Seeing him and Wren grow close was so beautiful to watch. Who can resist enemies to pining to lovers? Not me! They were such a delight to read and I my heart was constantly fluttering and swooning over them!

A terrible fate indeed, to be your prisoner.

I don’t want to spoil too much, but yes this lives up to the hype. The writing is gorgeous and the atmosphere is eerie. This has been marketed as Crimson Peak if it were a young adult novel and I definitely agree!

This was also a buddy read with Victoria, but really she finished immediately and I read a couple weeks later.. I’m sorry Victoria! I had some other deadlines that caused me to pushback my reading, but as soon as I hit ‘publish’ on this review, I am moving into her DMs to scream.

Thank you to Allison Saft for the arc! This title was released March 2, 2021.

5 thoughts on “ARC Review: Down Comes the Night”