Scarlett Winter has always known she’s a witch – and she’s determined to be the sorority’s president. But if a painful secret from her past ever comes to light, she could lose absolutely everything…

Vivi Devereaux has no idea she’s a witch. So when she gets a coveted bid to pledge the Ravens, she vows to do whatever it takes to be part of the magical sisterhood. The only thing standing in her way is Scarlett, who doesn’t think Vivi is Ravens material.

But when a dark power rises on campus, the girls will have to put their rivalry aside to save their fellow sisters. Someone has discovered the Ravens’ secret. And that someone will do anything to see these witches burn . . . 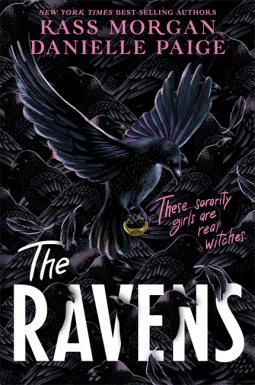 This is the type of witchy book I have been craving for! The witch coven is under the guise of a sorority and danger quickly ensues. There are two POVs, Vivi and Scarlett. Vivi is the new recruit and Scarlett is her mentor. They start off quite rocky because Vivi quickly catches the attention of Mason, Scarlett’s boyfriend. I won’t go into further detail to avoid spoilers.

While there are definitely a couple love interests, they take a back seat in this novel. This strictly focuses on The Ravens and the wicked magic they need to defeat. I personally enjoyed the magic and sisterhood to be a focus instead of romance. Maybe the second book will focus more on the love interests and I find myself actually hoping for that since there is one character I happen to want more of!

As much as I adore the paranormal elements, there are some scenes that can get a bit gorey. They don’t happen too often, but proceed with caution! I tend to not like scary things in general, but I handled this quite well. It was very enjoyable and gave just the right atmosphere.

The reason this didn’t get a full five stars from me is because of they way the past was constantly brought up but always in a vague manner. There is a death that happened that affects the coven, but they don’t give much explanation. Things are revealed towards the end, but I feel it was rushed and we still don’t see the full picture. I really hope it gets more clear in the sequel. I am definitely going to pick it up!

Thank you to Hodder & Stoughton and Netgalley for the arc! This title was released January 5, 2021.

4 thoughts on “ARC Review: The Ravens”