As an ex con artist, Nora has always got herself out of tricky situations. But the ultimate test lies in wait when she’s taken hostage in a bank heist. And this time, Nora doesn’t have an escape plan…

Nora didn’t choose a life of deception – she was born into it. As the daughter of a con artist who targeted criminal men, Nora always had to play a part. But when her mother fell for one of the men instead of conning him, Nora pulled the ultimate con herself: escape.

For five years Nora’s been playing at normal – but things are far from it when she finds herself held at gunpoint in the middle of a bank heist, along with Wes (her ex-boyfriend) and Iris (her secret new girlfriend and mutual friend of Wes … awkward). Now it will take all of Nora’s con artistry skills to get them out alive. 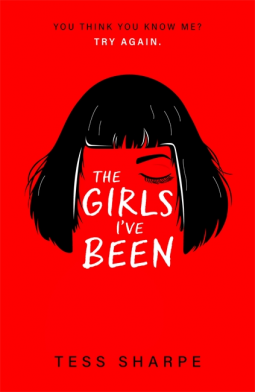 I am not much of a thriller reader but when I read this blurb and saw the main character was bi, I had to pick it up! There are two timelines. One is over the course of a day and the other is a flashback timeline of all of Nora’s identities leading up to the present.

This book really held on to me and didn’t let go until the end. I read this in one sitting which only took about three and a half hours! Nora is such an unbelievable character and the side characters really had their time to shine. I absolutely adored Iris, Wes, and Lee.

Iris is Nora’s current love interest and she is badass. She is feminine and clever and I really enjoyed reading about her. She isn’t afraid to get her hands dirty and she really matches Nora.

Wes, my sweet boy. He is Nora’s ex-boyfriend and she calls him her “franken-friend”. They reconstructed their friendship and have an unbreakable bond. Even when Wes is upset with her. Wes has his own heartbreaking story and it was a topic I felt handled well by the writer.

Lee is Nora’s half sister and she will do anything, and I mean anything, for Nora. It was so beautiful to read about their relationship. Lee experienced the same as Nora as a child and she will do what she has to in order to protect Nora moving forward.

This was an easy five out of five stars for me. I haven’t read anything in one sitting for awhile. Maybe I will have to read more thrillers or just more of Sharpe in general.

Nora had so many intense scenes and experienced a lot of trauma in her adolescence. There are definitely dark themes such as violence, abuse, assault, and death. Please check trigger warnings. I provided a link to the list shared by the author.

Thank you to Hachette Children’s Group and Netgalley for the arc! This title was released January 26, 2021.

12 thoughts on “Arc Review: The Girls I’ve Been”