DEFIANCE IS TREASON. TREASON IS DEATH.

A siege is laid against the last resistance to the Senate’s rule. As the battle rages, a commander, a soldier, and a rebel will decide how far they are willing to go for victory.

Marcus is forced to choose between destroying the rebel forces and liberating his legion. He must face the true cost of being a leader. And an oppressor.

Agrippa sets his sights on glory to fill the deepening void within him. He discovers that the price of fame might not just be paid in blood, it might be paid by his heart.

Silvara joins the rebel forces to fight against the legions who would see her family dead. While she dreams of being a warrior, she finds her sharpest weapon is seduction. But to defeat the Empire, she’ll have to betray the young man who now has her heart. 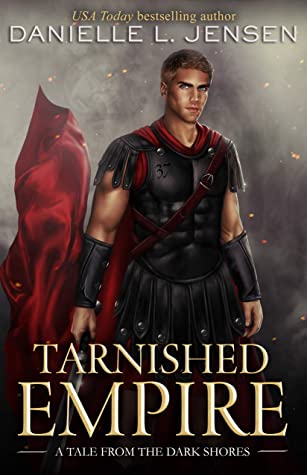 I am so happy I was given the opportunity to read and review this. As I have mentioned a few times on this blog, Danielle L. Jensen is becoming a favorite author of mine. Tarnished Empire is a new installment of the Dark Shores series. It follows Marcus and introduces some new characters, Agrippa and Silvara, who I absolutely adored. There is also an openly gay couple in this novella that I appreciated.

Before I continue any further, I would like to speak about the order of the series. Dark Shores and Dark Skies are parallel storylines and Tarnished Empire takes place before, so you can read them in any order. If you want more fantasy, I recommend starting with Dark Shores so you can become invested enough in Marcus to read his novella.

Tarnished Empire is very war centric and gives Galdiator/Troy vibes. There are definitely still some fantasy elements, but they are in the background. In this story, there are three point of views:

I absolutely devoured this within a day, which says a lot. I tend to be a slow reader, but I couldn’t put this down. It really helps the chapters are short, which I appreciate. I just kept telling myself “one more chapter” until I finished the whole thing!

This was a very light read given the setting of this story. Luckily for me, the battle was one of the very last chapters. It was pretty character centric up until that point. I laughed and gasped all throughout. Just please read this series so I can have someone to talk about this with! I am obsessed.

Thank you to Danielle L. Jensen for the arc! This title was released January 26, 2021.